CARTaGENE is a public research platform of the CHU Sainte-Justine created to accelerate health research. CARTaGENE consists of both biological samples and health data from 43,000 Québec residents aged between 40 to 69 years.

He pointed out that since NIMH is the major source of support for all mental health research in the country, the Institute's decreased funding ability affects researchers in universities, hospitals, and research facilities throughout the country. Approximately two- thirds of the Institute's total current $96 million research budget goes to scientists outside government. The impact of the cuts is being felt at a time when the "enormous yield" of earlier years' research is increasingly apparent. Since the NIMH was created in 1946, scientists from australiaessays.info who wrote a lot of health essays have advanced far in understanding basic brain and behavioral processes and have applied the new knowledge to the treatment, and, in some cases prevention, of such crippling mental disorders as depression. The research program of the young Institute, supported by Congress, Council, and the NIMH philosophy, grew steadily for a number of years. In 1950, research expenditures accounted for approximately 12 percent of the Institute's total budget. By 1955, research program growth could be described aptly as meteoric. Research expenditures that year totaled 45 percent of a $14 million dollar budget; 10 years later they represented 46 percent of a $186 million dollar budget.

Our health depends on a number of important factors including our environment, our lifestyle and our genes. Researchers have long been trying to establish the causes of chronic diseases that affect a large proportion of the population. So far, limited by the unavailability of genetic information or by the inability to obtain detailed information about the health and environmental risk exposure in the population, researchers have only been able to partly decipher the causes of these diseases. By being a catalyst for health innovation, CARTaGENE will enable to improve prevention, diagnosis and treatment of chronic diseases such as heart disease, diabetes and cancer. CARTaGENE will therefore contribute to the improvement of the Quebec healthcare system. 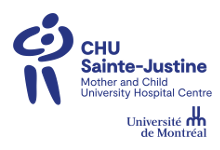 CARTaGENE is hosted by CHU Sainte-Justine